We were lucky enough to win from Washington Parent Magazine a group of 4 tickets to the opening night of George and Martha playing in Bethesda, MD at Imagination Stage.
Our tickets were waiting for us at the will call window and excitement was in the air. This was the opening night of the new children’s production of George and Martha, based on the popular book series by James Marshall.  (James Marshall also worked on the Miss Nelson series of books which our family loves.)

This play is listed for ages 3 and up. I think that any kids from age 2.5 to 14 would enjoy this play. Adults will laugh along too. It is really a play that would appeal to all ages.  George and Martha is playing from now until May 29th, so get your tickets early!
When we entered the theater we immediately noticed how colorful and bright the stage was. Tons of color everywhere.  The kids could not wait for the show to start.  Boy was this blogger surprised when I saw we had front row seats! The kids were literally bouncing up and down, so excited to be able to see it all, almost being able to touch the stage, ready for the show to begin. 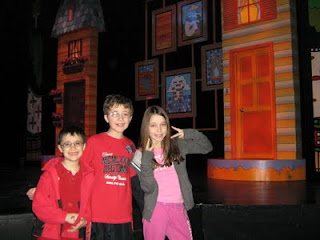 I had with me a 7 year old and two 10 year olds. All three of them laughed throughout the show. The ten year olds were not expecting to enjoy it very much, but they were cracking up for the whole hour.  The show follows the books pretty closely and if your children are familiar with the stories, they will recognize many of the various scenes.  The overall theme of the show is friendship.  There are two best friends who start to get on each others nerves over some very silly things.  But, in the end, they realize they miss each other and should stay best friends even though they cannot agree on everything.  One more thing you should know, there are tons of songs in this show! My ten year old asked me at the end if this was a musical. The songs were great, and really made the show even more fun for all of us!
We had taken a few of the George & Martha books out of the library so the kids were familiar with the characters and the type of story it would be.  The show lasted about 55 minutes, with no intermission. If you have a little one along with you, make sure you hit the bathroom before the show begins.  I will not ruin the show for you, but I will tell you that there were no scary parts or scary costumes. I think most kids would really love it.

Since we won our tickets to the opening night performance, we were lucky enough to hear an introduction from the Playwright, Joan Cushing, and also to be included on a backstage tour and reception when the show ended.  Joan gave us great insight into her ideas of how she wrote the play, songs and music as well as how she felt about the main theme of friendship and the characters.  She told us that she loved the drawings in the original books and would laugh at the books from just looking at the pictures.  There are pictures all over the stage that are inspired by the illustrations in the books. 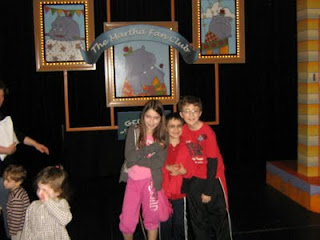 The backstage tour was truly amazing. My kids love theater and getting a glimpse behind the scenes was really a dream come true.  First, we were taken to the sound control room. We saw many wires, computers and the wireless mikes they used in the show. My 7 year old who is reviewing this on his own blog (monkeyitouchman.blogspot.com) was ready to get in a chair and run the computers for the next show.  We saw how the computers actually controlled all the sound effects including the big doorbell that rang whenever someone pushed it.  They also told us how they were forgetting to use one of the sound effects and just realized it and added it to the computer list of sounds.  This was a sound that they used at least 15-20 times in the play last night and I think it would be very funny if there was no sound for this effect.

Next, we saw the costume warehouse. This room was stocked full of costumes from all different times and places. They were grouped by date, so the clothing from the same eras were kept together.  After peeking our heads in the costume room, we saw the shoe area.  Hundreds of shoes everywhere you looked.  You cannot imagine how many pairs of shoes they had. Every color, style, size of shoes you can think of!  When we got to the room where they actually made the costumes for the shows, we saw four sewing machines, some mannequins, a steam iron, and some of the renderings (drawings they make before creating the actual costume). 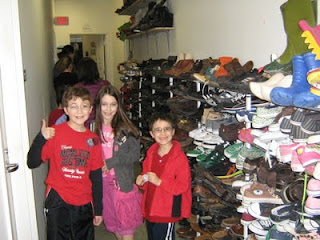 We next went downstairs to see where the sets were built.  We also saw where they kept the props in the wings near the edge of the stage.  We were allowed to take pictures on the stage which was really cool.  The stage was so cool to stand on. It was a little slick especially where 3 huge glass tiles covered an area that looked like it went 2 stories down to the ground.  The kids slid around, took a few more pictures and then we called it a night.

There was a lovely reception in the lobby for the opening night sponsored by Whole Foods. All of the actors were hanging around talking to anyone who wanted to ask questions.  My kids said to me, “Do you see where the PIG is, she was my favorite”. I would love to take a picture with her!  Little did they know, but the Pig (Kate Guesman), was out of costume and makeup and was standing right next to them listening and talking to other people. She was so sweet and talked with the kids and posed for pictures. The kids were starstruck! 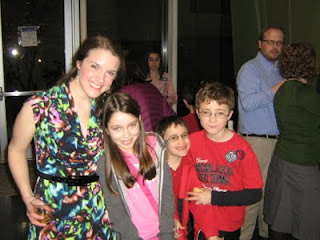 I guess my kids were tired because they turned down sandwiches, muffins and cookies and said they were ready to go home. As we drove home my 7 year old techie said, “Now I want to go see the show again so I can look around and understand more how the show works behind the scenes.”

I just want to thank Washington Parent Magazine, the Imagination Stage, and Whole Foods for an amazing night that we truly enjoyed every minute of!