I have been cooking for the past 40 years with little to no excitement, but this week I had a pretty amazing event occur.  I had a life-changing cooking event for me in my kitchen.  An ingredient that I have used often, but overlooked all my life, can truly be made into something magical.  What is this magical ingredient?

I will never look at a can of chickpeas, also known as garbanzo beans, the same again.

I have always loved chickpeas. They are delicious on salads, toasted up to a crunchy state as a delicious snack, and amazing in a soup or stew.  Chickpeas are also high in protein.  There is so much to love about them.  But wait, there is an overlooked ingredient in this can of goodness.  An ingredient until now that you have always thrown away.  (I am honestly tearful just thinking about all the magic I have poured down my sink in the past.)

I cannot keep this a secret any longer.  The magical ingredient I have used for the first time this week is the juice from the chickpeas.  This magical juice is called aquafaba, meaning water from the beans, or fabulous water.  Every recipe that I have made before, usually asks you to open your can of chickpeas, and put them in a colander and rinse them really well, while your liquid from the can drips down the drain.  From now on, I will be saving and experimenting with the aquafaba and keeping it in my fridge in a sealed jar, anticipating my future creations.

You might be thinking that I have lost my mind. But no, seriously, if you have a vegan in the family, you know that there is no good substitute for egg whites that truly gives you a similar consistency and result.  All egg white creations were always impossible to replicate, including marshmallow fluff, quiche, meringue, chocolate mousse, pavlovas, angel food cake, marshmallows and much more.  We have been cooking vegan foods for 5 years now, and always experimenting, trying to create old favorites and never once did it occur to me to save the juice from a can of chickpeas.

Now that I have lost at least half of the people reading this, let me explain to the rest of you how this aquafaba works.  Open your can of chickpeas and pour them into a colander.  Put the colander over a bowl and catch every last drop of the liquid.  My first experiment was chocolate mousse.  I served this mousse to vegan and non-vegan candidates, not sharing the ingredient list with any of them.  No one knew how I made it and everyone who tried it, gave this recipe a 10/10.  It tasted exactly like the BEST chocolate mousse I have ever eaten.  It was rich, creamy, airy, whipped with air bubbles and very decadent.  I promise that NO ONE will guess the ingredients in this mousse.

But wait, don’t throw away the chickpeas just to get to the juice.  Add them to a recipe, or make crunchy chickpeas (such an awesome healthy snack).  Here is a photo of my mousse and my crunchy chickpeas.  This recipe makes me feel like a magician. but I can now share my magic secrets with you.

In case you do not know how to make the crunchy chickpeas pictured above, dry off your chickpeas really well. Toss them in a small bowl with a little bit of EVOO, salt, and any of your favorite spices.  Bake at 400 degrees for 15 minutes, shake the pan a little, then bake them for 15 minutes more.  A total of 30 minutes and you will have crunchy snacks full of protein.  Eat them right away or they will get soggy.

I will try to explain how a magician can turn a can of chickpeas into a decadent chocolate mousse.  Measure 1 cup of your aquafaba into a mixer. I recommend a really good mixer because you will be letting it mix for over 10 minutes.  Pour the aquafaba into the bowl along with 1/4 tsp of cream of tartar and put on the highest speed for 5 minutes.  While the magic is whipping up, melt your chocolate.  I intended to use a really nice chocolate bar, but someone ate it.  So, I used vegan chocolate chips instead.  Melt between 1/2 and 3/4 cup of chocolate of your choice either in the microwave or a double boiler.  Watch it carefully.  Let it cool while you continue to whip your aquafaba.

When you have soft peaks formed (it will look just like egg whites) stop the mixer and add in 1T of your favorite sugar ( I used coconut sugar), 1/4 tsp of cinnamon,  and 1T of vanilla( I used Vanilla Bean Paste.)

Continue beating it until it is fairly thick.  I let the mixer go for about 8-10 minutes, you might need to do it longer depending on your mixer.  You want everything to be very well combined, and looking like stiff peak egg whites at the end.

Now here is the crazy part.  You are supposed to gently fold in your cooled off chocolate.  Well my chocolate was so cool that it was hard to get out of the bowl.  I scraped it all out and tried to gently fold it into the whipped meringue.  No go.  The more I tried, the more the puffy meringue collapsed.  I really started to doubt my skills, the recipe, and the entire project.  Finally, I just turned on the mixer on a low speed and the chocolate mixed in oh so nicely, and my beautiful meringue fell flat and soupy.  Before I threw it all in the trash and started again, I tasted the chocolate soup.  It was delicious.  There was no beany taste to it. It just tasted sweet but too loose for it to turn into anything I might serve.  I carefully poured my chocolate soup into ramekins and covered them with saran and put them in the fridge.  They are supposed to take 4 hours in the refrigerator to harden up, get nice air bubbles and puff up.  I really had very little hope that we would be having chocolate mousse for dessert.  Three hours later I carefully opened up the saran wrap, and OMG the mousse looked perfect. I quickly got a spoon and tasted it, amazing!  Everyone in my family had one and said it was the best dessert I ever made.  After the ramekins were licked clean, a few family members were not happy when I told them it was made from bean juice.  Next time I am not sharing my secrets.

As I type up this post, the chocolate mousses are long gone, but I am planning to make them again tomorrow.  We have great plans for our aquafaba, including rice krispy treats, lemon meringue pie, quiche, and an angel food cake.

Give it a try, I promise you will not be disappointed! 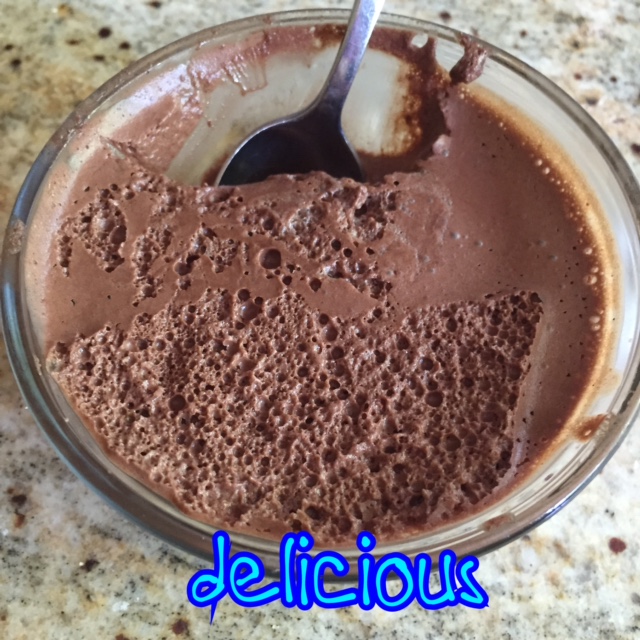